In the wake of the Las Vegas shooting where gunman Stephen Paddock opened fire at a crowd enjoying a music festival just outside Mandalay Bay Resort and Casino, celebrities like Olivia Wilde took to social media to post their reaction.

And it just so happens that the actress was at home caring for her kids as the shooting unfolded where more than 50 people died and more than 400 were injured. Olivia took to Instagram to post a photo of her reaching out to his boy who’s in a bath tub and kissing her three year old Otis on the lips. She posted the adorable photo with a caption that says “Finding hope in this”. 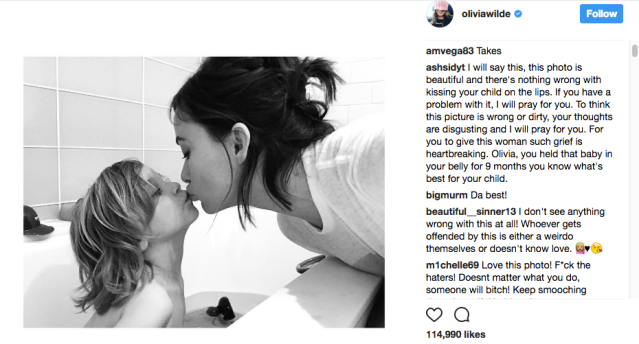 But many online bashers didn’t take the photo too well with some of them commenting:

“Kissing your kid like your husband. It’s not good for him,”;

Other than sexualizing the photo others went on to mention herpes and other communicable diseases that are spread through physical contact with an infected person. Others called it “gross and unsanitary” . One basher commented:

“To you this picture may be the beauty between a mother and child. To me, it’s a mother (unknowingly) putting a child at risk. And that’s not beautiful to me,”

There are those who were quick to defend the actress though saying this is a beautiful moment between a mom and her child. Most of the commenters said they often post pictures of them doing the same with their children. One supportive fan wrote:

“Wonderful picture!!!. These people that say this kiss is wrong clearly don’t have kids and or have a twisted view of affection!!!

Olivia isn’t the first celeb to get a lot of flak for posting photos of her kissing her child on the lips. In 2016 Actress Hillary Duff got shamed for posting this photo:

Followers posted negative comments about Hillary kissing her 4-year old boy on the lips. With some of them saying it’s “disgusting” and inappropriate”. Others even commented :

“I love Hilary Duff but this creeps me out. Don’t kiss your 4 year old on the lips. “

Hillary responded by saying those people with their “warped minds and judgement” can feel free to unfollow.

That same year former Spice Girl turned designer Victoria “Posh Spice” Beckham caused quite a stir online when she posted a photo of her kissing her daughter Harper while celebrating the little girl’s 5th birthday. 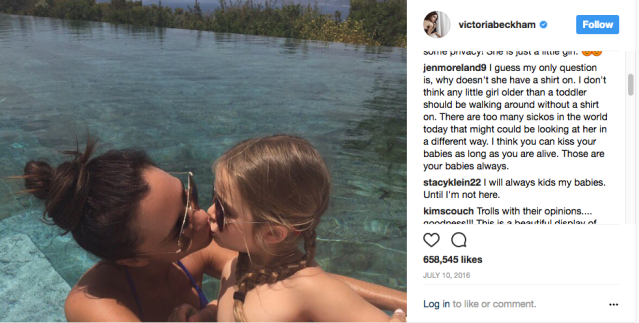 “Eww sorry I’m old fashioned it looks like they making out,”

In a separate post Victoria’s husband, famous football superstar David Beckham got a lot of flak for posting a photo of Harper kissing Daddy on the lips.

In a Facebook Live discussion David defended the photo by explaining that both him and Victoria are very affectionate towards their kids because that’s how they were raised. “I kiss all my kids on the lips,” he said.

“Brooklyn, maybe not. Brooklyn’s 18, he might find that a little bit strange. But I’m very affectionate with the kids. It’s how I was brought up and Victoria, and it’s how we are with our children,” he explained. “We want to show our kids love and we protect them, look after them, and support them, and we’re very affectionate with them,” he added.

This just goes to show that the Internet has made parent shaming even worse, and a person’s celebrity status won’t protect him/her from the onslaught of negativity from shamers ready to pounce at people and spew vitriol online.